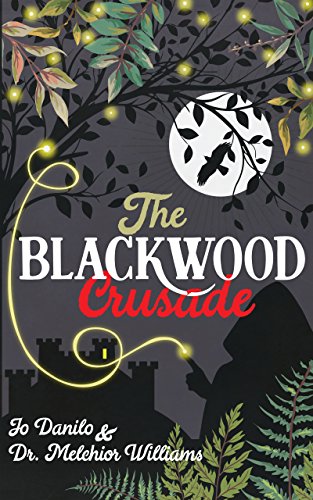 This morning I woke up from a dream I could not remember, save that part of it was the haunting poem from Jo Danilo’s ‘The Blackwood Crusade’.

It is a very touching poem.  Here is is in full.

‘Tis just the beginning of you and me

As we wander by the stream.

You on one side, I on the other,

Just water in between.

I’ll sing to you as time goes by,

As winter melts to spring.

As flowers bloom, and die again,

So to life we’ll cling.

I’ll sing to you as the river floods,

And we’re poured into the sea.

And then I’ll hold you in my arms

This is the song that the joint hero, Silas, sings to his baby sister, a strangely precocious and magical infant who seems to come, like the rest of Silas’ family, to a tragic end in the river.

Thinking of it, reminded me what a great book this is.  It is a fairy story for all ages, by turns funny, sad and adventurous.

Here is the page on Goodreads

I found this a real page turner; it may be officially YA, for twelve or over – but it is not a book with an appeal restricted to a particular age group, It is laugh-out-loud funny, intriguing and sad in turns.

At the climatic scene, where the protagonist Silas is briefly given his own particular hearts’ desire – only to have it snatched away – I found that there were tears in my eyes. That is a compliment indeed to the writer, as these days, after reading so many novels, I am hardened towards characters’ feelings – unless they are really well portrayed.

It begins with the feel of a quirky, tongue-in-cheek fairy story, but it is far more than that; the rising tensions in the merciless battle between the humans and the ethereal population at Blackwood leads to a climatic section of powerful transcendence ( a word that readers who are truly YA may have to look up in the dictionary, but a useful one to know for literary criticism).

In fifteenth century England, the family of the fisherman ridiculously called Crumb are delighted when a baby sister is finally born to their son Silas. But the genius baby has been conceived through magic, and is finally revealed as a changeling.

The family have a few happy months together before they realise this. During this time Silas – an unusually sensitive boy – makes up and sings a wistful cradle song to his sister which has much relevance to what happens later:

‘‘Tis just the beginning of you and of me,
As we wander by the stream.
You on one side, I on the other,
Just water in between.

I’ll sing to you as time goes by,
As winter melts to spring.
As flowers bloom, and die again,
So to life we’ll cling.

I’ll sing to you as the river floods,
And we’re poured into the sea.
And then I’ll hold you in my arms
Together, finally.’

In carrying out the ritual recommended by the priest to exchange a changeling, both parents and the baby are drowned. Silas is left alone. He is devastated, but after a months’ disappearance, during which time he is seemingly mysteriously healed, he returns to the village and his old life of fishing.

As he grows up – seemingly light hearted again – he becomes friends with a local gypsy youth, Otto. He falls for a village girl, the spirited tomboy Mab, who unfortunately for him, only cares for him as a friend.

She is in love with the handsome Otto, who fascinates most of the women in the village: in fact, Christina notices about him:

‘The way he walked and the way he held his head showed how confident and sure of himself he was. He had a very authoritative air. A girl would feel safe from the world in his arms.’

The villagers have no doubt that evil magic from the fairy population caused this tragedy and many others. They have long been petitioning the local lord of the manor to do something about it – without success.

These fairies are anything but sweet. They are warlike, vengeful, and if delicately made, often human sized. They regard humans as their natural enemies.

The Lord of Blackwood believes that the peasants exist to give him taxes, not to be protected from nonsense about fairies exacting tolls to venture onto their land.

Some of the petitions are serious, but some are absurd. The absurd ones made up some of my favourite parts of the novel:.

‘Mrs Wainwright went to the Black Wood to gather mushrooms last week, but forgot to pay the toll. She awoke in her bed the next morning with no recollection of what happened after entering the woods, and without a sense of smell. She believes she was abducted by the faeries who subjected her to experimentation. (The Lord of Blackwood was informed of this petition, and concluded that Mrs Wainwright’s lapse of memory is most likely due to harvesting and consuming the wrong type of mushroom).’

Christina knows of Silas’ tragedy, and the fear under which the villagers live. When her alarming stepmother is killed in a hunting accident, she learns that her taskmistress – who brought her up to be stoic and hardly – was preparing her for an hereditary task, that of fighting the fairies, which she has long been doing herself.

At Christina’s first attempt to confront them, her eyelids are magically removed by one of the enemy. This horror, which might have destroyed her, inspires her to become a wholly dedicated warrior. She wants vengeance, for herself, for Silas, and for the others. Christina mourns all night; she knows that disfigured as she is, she will almost certainly never marry and have children now. She must become the dauntless warrior that her stepmother wanted her to be.

She enlists the help of a Captain of the Guards, a redoubtable warrior who recommends a gruelling routine:

‘VI of the Clock: Upon waking, immerse completely in a cold bath to waken the mind and body. Breakfast: Porridge, 3 eggs and fresh bread. VIII of the Clock: Dress in full armour and run three times around the castle walls, stopping as little as possible. Followed by sword practise in the yard with one of the soldiers. Followed by an ascent of the Keep (still in full armour). If all this is completed before lunch you may take a rest…’

This seeming mercilessness is based on concern for her welfare: he knows that she must be in unbelievably strong and tough minded to wage her personal crusade against the ethereal enemy. He is in fact a lovable man (my personal favourite in the book). She comes to realise: – ‘She loved him without question, and had for a long time. She had hidden it well even from herself.’

But then tragedy strikes…

Meanwhile, Mab and Otto have discovered that they are in love. She has visited the Sacred Tree, which grants wishes, to ask for Otto to be hers. Unluckily, she forgets to pay the toll to the fairies. Accordingly, he has been kidnapped by another gypsy group by way of retribution from the faeries.

She and Silas go in search of him. Mab is brave; Silas has something to learn about courage, and they make a comic duo as they go through many, often alarming, and often laughable, adventures.

But at last, all the main characters meet in Blackwood, to enact a decisive conclusion to the war between the humans and the ethereal enemies.

It is difficult to do justice in a review to this book, as it is wholly original. Likeable characters, unexpected twists to the plot, exciting confrontations, happy and sad scenes and dark humour combine to make a truly unique tale.

To round off, here are some of my favourite quotes:

‘The trees went from being welcoming towers of greenery to being haggard, frosty sentries with a sudden wind howling through their branches.’

‘As always, he pictured his family. His mother was knitting at the fireside, his father was smoking fish in the backroom with his cheerful whistle clearly audible, little Salome was sleeping soundly in her crib by the small window. Silas shook his head. With a puff, it all vanished.’

‘Now he was angrier than he had ever been (which was not difficult). He roared at the faeries and charged. It did not matter if he lost his life, for he had lost everything.’

You can buy this book  on Amazon.com here
and
from Amazon.co.uk here