Reblogged from my Archives: The Gary-Stu or Marty-Stu; Neglected Compared to the Mary-Sue.

I wrote a longish post about research for historical novels and changing opinions on ‘facts’ in history, and guess what – my PC has eaten it. It is ‘irretrievable’.  Ironically, part of the post metioned the frustration of wasting hours carrying out fruitless research on topics where nobody can give you anything but the vaguest of answers. Well, I wasted a number writing that post, that is for sure.

Seeing that I have resolved to write a blog post every ten days or so in 2020, I am going to cheat and reblog this post that I have already reblogged once, as it still seems to get a fair amount of reads. It is about the male equivalent of the Mary- Sue.

I’ve been looking for discussions about the male equivalent of characters defined as Mary-Sue’s online, and what interests me is how few posts there are about Gary-Stus and Marty-Stus,and how few male characters are defined in this way.

In fact, I read a blog which, while admitting that there are few Gary Stu discussions compared to all those  Mary-Sue accusations flying about, didn’t explore this, going on instead to list various heroines perceived by the author as Mary Sues. I was surprised to find Elizabeth Bennet on this blogger’s list; but more on that later.

Goodreads has a ‘Listopia’ list of Gary-Stus. As I am not a great reader of current fantasy, and most of the male leads named came from this genre, I didn’t know enough about the characters to comment. Even I, however, knew the male leads from the top two. First on the list was Edward Cullen from ‘Twilight’ by Stephanie Myer, and second was Jace from ‘City of Bones’ by Cassandra Clare.

Well, I think I said in my last post that the fact that many readers define the heroes and heroines of these books as Marty-Stus or Gary-Stus seems to have done little to detract from their bestselling status and continuing popularity.

I did let out a hoot of laughter at seeing that Frances Hodgeson-Burnett’s tiresome ‘Little Lord Fauntleroy’ featured on this list, that infamous young Cedric of the sailor suits and suave compliments. 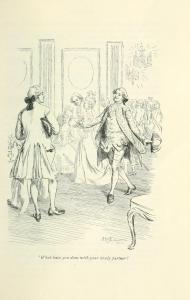 I added the hero of Fanny Burney’s ‘Evelina’ to this list. Lord Orville is, surely, the original Marty-Stu, perfectly matched to the heroine who competes with Pamela for the title of the original Mary-Sue.

Lord Orville is handsome, witty, suave, gallant, and unlike his roguish rival, Sir Clement Willoughby, tenderly respectful of the heroine’s innocence (this is off topic; but did Jane Austen borrow Clement Willoughby’s name for her own rogue in ‘Sense and Sensibility’?).

I also added the secondary hero of Elizabeth Gaskell’s ‘Sylvia’s Lovers’ to the list. Charley Kinraid ‘the boldest Specksioneeer on the Greenland Seas’ is handsome, fearless, irresistible to women, can drink endlessly and never fall down, is a brilliant raconteur, beguiling and the life and soul of the party. Just about the only person who doesn’t admire him in the book is his jealous rival Phillip Hepburn.

Not only that, but he has so much good luck that he is virtually indestructable. He survives two serious gunshot attacks without seemingly lasting ill effects. A woman is rumoured to  have died of a broken heart after he finished with her.

The only bad luck he has is falling victim to a press gang, and the Royal Navy officers quickly take to him and realizing his exceptional abilities, promote him so that within a few years, he is able to marry an heiress. Then, further promoted to Captain, he is able to send out press gangs of his own…

As the term ‘Mary-Sue’ (later mutated to ‘Marty-Stu’ or ‘Gary-Sue’ to accommodate male characters) originated in fantasy fan fiction, I suppose it isn’t surprising that most of these online discussions are about this genre.

I did find a very witty catalogue of types of Marty-Stu on this link. Unfortunately, it’s about those on television rather than in books. It is excellent, and the types are easily recognizable in novels as well as television series and films:

This biting paragraph is particularly apt:

‘Dark Hole Stu: His gravity is so great, he draws all the attention and causes other characters (and, often, reality itself) to bend and contort in order to accommodate him and elevate him above all other characters. Characters don’t act naturally around him – guys wish to emulate him and all the girls flock to him regardless of circumstances. They serve as plot enablers for him to display his powers or abilities, with dialogue that only acts as set-ups for his response. He dominates every scene he is in, with most scenes without him serving only to give the characters a chance to “talk freely” about him – this usually translates to unambiguous praise and exposition about how great he is. Most people don’t oppose him and anybody who does will quickly realise their fault in doing so or just prove easy to overcome. ..’

Nevertheless, looking about for Marty-Stu or Gary-Stu discussions, I am a bit perturbed. There was seemingly so much more talk of Mary-Sues on the web compared to that centering on their male equivalents.

This seems accurately to reflect the different standards  and expectations applied to male and female characters. There does appear to be a good deal less resentment of male characters presented as admirable, handsome, unflappable, invincible in fights, and invariably attractive to most women.

In fact, being emotionally challenged is often seen as a desirable attribute in these stereoptypical male leads. It is only rarely one with female leads. This has led me to wonder how readers would react, say, to a female version of the Byronic male?

This strikes me at least as being unfair.

I also note, that  for some reviewers, the term ‘Mary- Sue’ is applied rather loosely, being leveled at almost any female character whom they for whatever reason, resent.

This leads me back to the term being applied by one blogger to Elizabeth Bennett. She doesn’t seem to me at all to qualify.

Yes, she is lucky to attract the hero’s admiration, but she does that through wit rather than her looks, which as everyone knows, originally elicited that  ‘not handsome enough to tempt me’ remark from him. It is true that her mother doesn’t appreciate her, and a virtual requirement for Mary-Sues is not to be appreciated by her family – but she is her father’s favourite daughter.

Apart from wit and dancing, she has no particular skills apart from perception.  In the book (as distinct from the film versions) she is depicted as a mediocre singer and pianist; her sister Mary in fact described as more skilled, but with an affected style, so that people find her performances tiresome.

Therefore, it would be good if readers applied that suggestion I found on a fan fiction website about Mary-Sues: ‘Would I find these characteristics so annoying if she was male?’

‘Jason Bourne, Tintin, James Bond, Ethan Hunt would all ‘fit the description’. The absurdity of these Gary Stus doesn’t go unremarked by fans, but it doesn’t seem to evoke the same cultural baggage and resentment as many Mary Sue characters – for one thing because the intrinsic role-conflict (for which read ‘socially conditioned expectation’) inside male character leads is less complex…and for another because we are so used to them..