‘Where World’s Meet’ Free on Amazon on 17 and 18 May: Below, Some Comedy for Testing Times: A Ludicrous Conversation Between Man Vampire Kenrick and His Siren Housekeeper 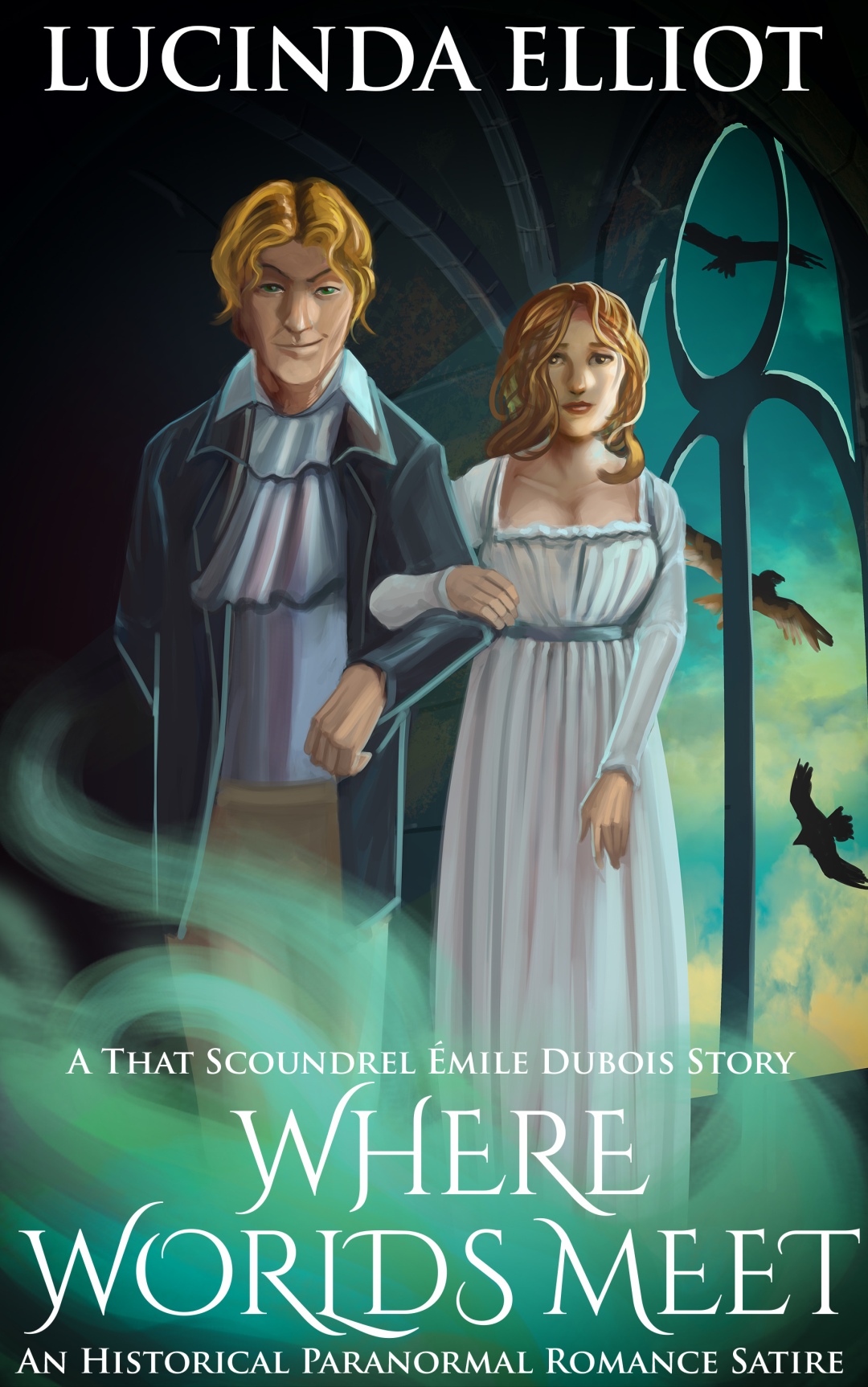 Kenrick fingered his teeth. “As for your complaints about the slaves, these later efforts should make more satisfactory domestics, also adding to the numbers of my private guard. Besides, you also are yourself remiss. You promised me that late hypocrite’s notes. I have yet to see them, though you squander time on ineffectual journeys to Plas Planwyddan.”

“I am setting them in order, in the little spare time I have: hence my complaints.”

He ran his cold glance over her. “Then do not dally.” Her lips thinned again as he went on, shifting uncomfortably. “It must be some hours before I recover those chest wounds. Dare I risk a last sup of your blood for a tonic?”

She touched her own teeth. “You said that of the last you took. You forget, Mr Kenrick, you supped heavily from me on your return. I believe I turn too far for you to take from me. Still, if you care to risk it…”

“Let me smell you.” Lunging, he brought his nose close to her throat, and now entirely vulpine, sniffed, his glassy eyes as bright as silver coins. Even as she flinched back, he pulled away, grimacing. “Faugh! You stink of the kitchen.”

“Naturally, when I have been working there, as you have failed to give me an adequate cook. That girl has much to learn, and the creature Galahad is only good for a kitchen scrub. The others areonly fit for the outdoors.”

Kenrick’s voice rose high, “I asked that lout Williams to use those vulgar looks to draw in some healthy wench to set my teeth a-tingle, but he had the insolence to deny me, protesting that he is too much occupied in training the knights. He added that a surfeit of blood is not good in the early stages of return – much he knows of it. I must expect a protracted convalescence, since that hulking lout still complains of pains in his innards, nigh on a week after his return.

“I suspect he malingers. His scrub is yet human. Doubtless he lingers like a gourmet, relishing every mouthful, while refusing to share her. Why he is so selfish about that slut, when that Frenchman must already have sunk his fangs into her, I cannot fathom. The fellow has become arrogant. I see how things must go in a household without a master.”

“Also, one without a mistress,” she said.

“Humph! I must try you; your blood may yet be good for a last tonic.” Kenrick broke off to wipe away the saliva that had gathered at his lips.

Guinevere Gwynne’s face hardened as she lengthened that fine, long neck above her swelling bosom. “Bite, then.”

“I suppose I must endure the odour –” he pressed his mouth to her creamy skin, and then wrenched away again, shuddering in revulsion. “Ugh! You even taste of grease!”

“That is fat from the roasting fowl merely. I felt the sting when it spat as I bent over it earlier. That will not trouble a hot blooded man vampire.”

“It troubles me, Madam,” Kenrick drew out a handkerchief to wipe his lips. “You stink like to a greasy kitchen wench.”

“Maybe even as that little girl, your late wife’s favourite Katarina. did once, before Dubois took her away],” mused Guinevere Gwynne. “As I say, what can you expect, if I must perform as cook?”

“It is not good enough,” said Kenrick with dignity. “You degenerate into a slattern, Madam. I really cannot have a housekeeper who smells. I see I must ready the remaining slaves to take on this work.”

“For now, I must return to my work in the kitchens. Later this evening, I may find time to set the late Professor’s notes in order.”

As she tuned away, a knock sounded at the door. She opened it to two of Kenrick’s latest knights.

“Master Arthur said we must report to the Great Master,” droned the taller, who looked like a grotesque version of Reynaud Ravensdale.

“Come in if you must,” Kenrick snapped, “Why do you intrude?”
Guinevere Gwynne drew away as they passed.

In the first, Kenrick had clearly tried to reproduce the Grecian proportions of the original, but his skill had fallen short. The figure was athletic, with perfectly proportioned head and columnar neck. But while it had a recognisably Grecian profile, its nose coming straight down from its forehead, its mouth had a twisted look, while its eyes were so wide set that they gave an impression of a divergent squint, and its heavy eyelids and thick eyelashes had been overdone to the point where they drooped as if it was half asleep. Its skin, like Lancelot’s, was far more human than that of the others. The bright chestnut waves made a thatch so coarse that it stood up in wild disorder.

Its associate was less flamboyant. It was a version of Galahad, short and squat, with oversized hands. Its coarse hair was seemingly made of twine, and it had elementary features and a lipless mouth resembling a letter box. Its glassy eyes were prominent and lashless, while its large jaw and chin gave it a pugilistic look.

Both were dressed in tattered, ill fitting livery.  Perhaps it was that same livery once worn by the sullen manservant who used to startle visitors by shouting up from the basement. Their clothing was disordered, and their skin oozed the inevitable green life fluid from cuts to face and hands. They bowed low as their master glared at them.

“Why does Arthur send you? Does it concern our enemy?”

“Great Master, Lancelot sent us out to get the eggs and potatoes from the farm down in the village. As we passed the inn, a group of men in uniform surrounded us, shouting,‘ In the King’s Name!’ They said we were vagabonds, they knew our sort, and we must join the Royal Navy to fight the French.”

Kenrick drew himself up. “A press gang, I take it, though it’s far inland for them. I’ve heard tell two brothers from hereabouts do that work, and like enough have been sent after Arthur by one of those cowardly yokels. The insolence to mistake my liveried servants for vagabonds! Naturally, you escaped them?”

“We said that the Great Master would not permit it.” They said, “Shite upon your Great Master’ and seized us.”
It stared at a snorting noise from Guinevere Gwynne, then resumed, “I threw one over the hedge. They were angry, setting on us with clubs. We seized these, but tore our skin. Then they set up an outcry, saying much of, ‘Damn my eyes’ and ‘’ Ware that blood, Fred; they have the pox as like as not,’ while trying to rub our gore from their own skins.

“Then they ran from us, with the one who had gone over the hedge coming up fast behind. We chased them, and the locals hooted and clapped their hands. But some made an outcry in the Welsh tongue, and one spoke in English, ‘Kenrick’s monsters have scared them away; it is not good enough.”
“In future, you must be on your guard: prevent them at all costs from ambushing Master Arthur as an ex-sailor. Now be on your way.”

When the creatures had left, Kenrick turned a cold glance on Guinevere Gwynne, who laughed helplessly.

The book is still on offer on Amazon here here