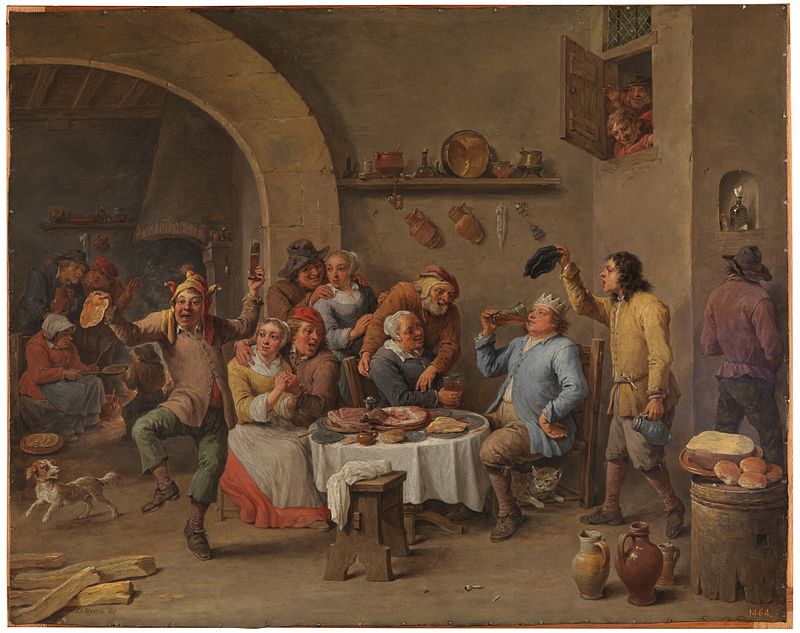 It is an interesting thing, that it is very easy to get the impression that life in the UK of  pre-industrial times was, for the majority of the population if not for the tiny upper class, one of unrelenting toil  and uniform drabness.

This image is surely mistaken.

Everyday life was certainly hard, and life expectation was low (partly due to the tragically high rate of infant mortality). The standard of living for the majority of the population, who would have been working primarily in agriculture and in home based manufacturing, involved  working from a very early age to contribute to the family income, crowded living conditions,primative forms of medical treatment, a minimal education, a dull and often sparse diet, very few luxuries and a narrow existence.

However, the  times of extended hard work and little play were varied with periods of festivity and general feasting. There were fairs,  dances on the green, processions, and religious celebrations which were all occasions for general light hearted fun.

This was especially true of the Chistmas season culminating in the Twelfth Night revels, or the Twelve Days of Christmas.  In Europe of the Middle Ages, this was a time of a series of saints’ days where only a minimal amount of work was done and there was general feasting and merrymaking. Many pagan customs from Yuletide were incorporated into the Christian celebrations.

On Twelfth Night (Epiphany) a Lord of Misrule (usually a peasant) was appointed to preside over the Feast of Fools, and it was traditional for communities to stage a play, usually a comedy: hence the name of one of the most famous of Shakespeare’s own.

How much the view that an ‘all work and no play’ atttitude towards life for the masses became the official idology after the industrial revolution, is surely illustrated by the mid-Victorian novella,  ‘A Christmas Carol’.

In Victorian times, employers often only allowed their staff to have one day off – Christmas Day – and some shopkeepers even remained open for part of the day.

In the story, Scrooge, of course, is shown to be a joyless old miser who has forgotten how to be charitable, and he is roundly condemned for refusing to celebrate Christmas Day and for grudging his clerk Bob Cratchit even one paid day off.

Yet, it is worth noting, that the length of the old festive celebrations had been massively curtailed for everyone.  When Scrooge wakes up on Christmas morning a changed man, he is,  for instance, is able to buy a goose to send Bob Cratchit’s family. Some shops are obviously still open, for the morning at least.

Twelfth Night now, as then, brings to an end a period which is effectively the culmination of the old year. Now is the time when  New Year’s resolutions must be put into effect.

I have made a couple of  serious ones with regard to real life. The lighter ones, and those with regard to writing, include finally getting round to that Christmas ghost story.

Besides that, a couple of years ago, I urged fellow writers to think of rescuing that stranded manuscript in the drawer as a New Year’s resolution.

Regard it as an act of charity towards the poor things…A writ of habeas corpus applied to manuscripts, perhaps.

For myself, I have just retrieved a quarter completed manuscript that has been on hold for eighteen months.

For anyone who might be intersted, it is all about a topic I touched on in ‘Alex Sager’s Demon’ – characters from novels coming to life….

To end this post, here is a nice picture of Charles Dickens. Regular readers will know my opinion of his outrageously hypocritical treatment of his wife in middle age, when he became infatuated with the young actress Ellen Ternan. Our image of him, in fact, tends to be from photographs of the middle aged man he was at that time. Therefore, it is refreshing to see one of him as a younger man who looks entirely different.