Mary Stewart, Romantic Suspense, and Her Quote on ‘The anti-brigade, the dirt brigade, the sicks and the beats’.

“I don’t want any one made troubled or unhappy by anything I’ve written; perhaps ‘depressed’ and ‘hurt’ are better words.” She expressed her disgust with the “anti” trend of the 1950s, “all the ‘anti’ brigade, the dirt brigade, the sicks and the beats.”

This is a quote (or rant) from a writer who created a genre – what I believe is known as ‘romantic mystery’ and who I gather has, like Georgette Heyer, come back into fashion recently.

I read a couple of her books longer ago than I  care to admit, when I was fourteen. I didn’t take to them, though I could see that they were well written with complex literary allusions. Like Heyer, they have many admirers and also like Heyer’s, they struck me as being written very much from a conservative, conventional sort of perspective that drove me wild as a rebellious fourteen year old. Mary Stewart may have imagined her books offended nobody – but here’s one exception at least. Her books made me highly uncomfortable.

Mary Stewart in the above quote seems to be disgusted with people who are ‘dirty’ and while that would include the whole human race in the eighteenth century, and all the underprivileged in the nineteenth and early twentieth centuries, I assume from her phraseology she means the people of the mid twenties century who were supposedly infamous for dirt of body and mind – the dreaded ‘Beatniks’.

I have only ever met one elderly person who admitted to having been a ‘Beat’ in that era. I don’t know what happened to the rest of them – whether they vanished from the face of the earth, or were perhaps indistinguishable from the aging hippies I used to see about.

The elderly man I met was not impressive, though for a member of ‘the dirt brigade’ his personal hygiene was unremarkable – he wore an old sheepskin coat and went about with a copy of ‘The Lord of The Rings’ in his pocket. He also sometimes carried about a guitar that I suspected he couldn’t play (I am not making any of this up). He didn’t seem to do anything much but smoke dope. I suppose he read that book now and then.

So, I have no reason to have any particular fondness for what I have heard of ‘The Beat Movement’. But I have to admit, I have only regarded them up to now as an aspect of social history and the protest movement of the young in the affluent, Cold War dominated nineteen-fifties and sixties.

Nevertheless, when I came on this quote recently, it ruffled me. It took me a minute or two to work out why (quick on the uptake, eh?)

I don’t like the assumption that any social protest movement is by definition merely ‘anti’. If you are ‘anti’ something, you are generally pro something else. It may be something bizarre or unpopular; it may even be nonsensical; but I have yet to encounter any human being who is only motivated by antipathetic motives. People almost by definition see themselves as being ‘for’ something. And if  you are for something, you will tend to be, however fair-minded you try to be, against something else.

So, what do I know about the Beatniks before I go and look on Wickipedia?

I believe that Bob Dylan and Joan Baez and other famous folk singers who were part of the peace movement were connected with Beats.

The look the Beatniks cultivated, I gather, long hair and beards, was based on the look of Fidel Castro, Che Guevera, and the other guerrillas who had recently won their guerrilla war in Cuba, and whose hair had grown long in the Sierra Maestra. They were obviously icons of complete rebellion, and  that look soon enough became fashionable.  If anyone was anti establishment and terrifying to middle class, middle-aged respectable people, it was Fidel Castro and Che Guevera. Therefore,  for a man to grow long hair and a beard was to align himself against the establishment. 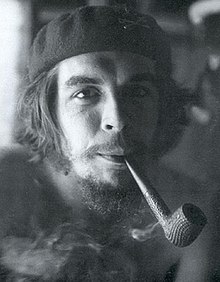 Like them, too, I believe they challenged conventional materialistic values based on property ownership– though from a different ideological perspective. And while the ‘Beat Movement’ of that time may have attracted many individuals like the man in the sheepskin coat, some of the beliefs listed by their proponents seem to me entirely commendable. This is what Wickipedia has to say about some of their ideology: –

‘The Beat philosophy was generally countercultural and anti-materialistic and it stressed the importance of bettering one’s inner self over and above material possessions. Some Beat writers, such as Kerouac, began to delve into Eastern religions such as Taoism or Buddhism. Politics tended to be liberal, with support for causes such as desegregation…’ Now, for instance,  virtually everyone these days not a fascist would believe that segregation was an excellent thing about which to be highly ‘anti’ .

‘Many scholars speculate that a reason that many Beat writers were interested in and wrote about Eastern religions was because they wanted to encourage young people to practice spiritual and sociopolitical action. As a result, these progressive thoughts originating from East Asian religions, influenced the youth culture to challenge capitalist domination and break the dogmas of their generation. The Buddhist idea of achieving inner freedom was popular among the Beatniks. As a result, it motivated this movement to reject traditional gender and racial rules.’

From this, I suspect that Ms Stewart, who assumed that they were ‘anti everything’ only meant that they were anti the sort of standards which she upheld. Now, as I say I haven’t read any of her novels since I was fourteen. I found them too conventional, full of nice girls who hand over the steering wheel to a man and don’t do any Naughty Naughty Tut Tut stuff before marriage.

Perhaps she had read, and believed, all the bad press Beatniks had.
Some of it is quite fascinatingly lurid; for instance, that gun waving grinning lunatic depicted in the film poster above.

I find this quote, and the bugbear of fear of Beatniks, fascinating. It is obvious that Mary Stewart had a blind spot; she could not see that her notions of the ‘decency’ she goes on to mention in that interview were not the only ones, and that it was  permissible to challenge these without being some sort of rebarbative ‘sick’ with twisted ideas.

It’s instructive, because I sometimes can be in danger of falling into the same trap myself, from a wholly different social and political, literary and historical perspective.

Last of all, here’s a cover from one of Mary Stewart’s works.

4 thoughts on “Mary Stewart, Romantic Suspense, and Her Quote on ‘The anti-brigade, the dirt brigade, the sicks and the beats’.”