‘The Tenant of Wildfell Hall’ by Anne Bronte; An Underestimated Classic

A reader of this blog was flattering enough to want my opinion of Anne Bronte’s ‘The Tenant of Wildfell Hall’. I was delighted, as that was a novel that fascinated me, and it gave me a reason to bring it up on my long and dusty reading list ( a second attempt at ‘Moby Dick’ was supposed to be next).

I first read this longer ago than I care to admit, when I was in my early twenties. I remember being impressed with it then, and thinking that for powerful writing, and Gothic effects, it is easily the equal of either ‘Wuthering Heights’ or ‘Jane Eyre’; why was Anne Bronte so underestimated as the least gifted of the Bronte sisters?

I think the introduction of the edition I am reading 2008 by Oxford World Classics  by Josephine McDonagh, gives one very good reason. Anne Bronte was the youngest child in the family. Older siblings are not exactly notorious for giving a fair estimation of the capacities of the youngest, not as a conscious piece of injustice, but through an unquestioned attitude which never concedes that youngest sibling can be anything but  comparatively undeveloped, and can often fail to take into account the age of the youngest when certain remembered events took place (I couldn’t possibly have experienced the position of youngest sibling myself, by any chance?).

There is an anecdote about the reactions of the young Bronte’s when each chose one of Bramwell’s set of toy soldiers, the imaginary adventures of whom would lead to the construction of the fantasy worlds of ‘Gondal for Anne and Emily,  while Bramwell and Charlotte created ‘Angria’. Charlotte and Emily chose fairly striking figures; Anne selected a little, unremarkable one; this seems to be taken to indicate generally less striking taste on Anne Bronte’s part and perhaps a wish to take the place of a follower in life. Ms McDonagh points out that Anne was six years old at the time.

Little is known about Anne’s life; the little we do know of her is often from the recollections of her fond but condescending older sister Charlotte, and it seems that she has been judged accordingly as a writer of works less strong, as something of an afterthought amongst critic s of the Bronte’s.

More recently this has been belatedly challenged, and now I come to the second reason why I think that Anne Bronte’s work has been underestimated. ‘Agnes Grey’ her first published work ,was a short, vivid and painfully believable (because based on personal experience) account of a sheltered young girl’s short career as a governess. It was not a ‘romantic’ novel (in the old sense) with a gothic hero, but a realistic one.

It is shocking in its depiction of dismally indulged, unfeeling children and astoundingly insensitive parents who saw a governess as a drudge devoid of human feeling; but it is not gothic in tone. There are no rambling, derelict mansions, brooding anti heroes or haunted attics, wild passions or captive maidens such as one encounters in ‘Wuthering Heights’ and ‘Jane Eyre’. It is a sobering (if you’ll forgive the expression, in the light of what is to come) tale, and one with a strong moral point (all the Bronte sisters were strongly moral in their differing ways).

But ‘Agnes Grey’ could not have the impact on the critics in the manner of Charlotte and Emily Bronte’s Gothic novels which were also published in 1847, and Anne Bronte was accordingly seen as the more conventional, milder and narrower writer.

‘The Tenant of Wildfell Hall’ was thought by critics to veer in the opposite direction. ‘Acton Bell’ was fated as a writer to fail to please. Critics, though retaining the belief that she was still the least gifted Bronte, were disgusted at the depictions of the wild drunkenness and moral degeneracy depicted within, and in general took a low view of the literary merit of the novel.

Anne Bronte here depicts the life of a devout but healthily sensual girl from the gentry who in the late 1820’s falls for the charming and high spirited, hard drinking Regency rake Arthur Huntingdon. She marries him against the advice of the aunt who has raised her. This aunt, embittered by her own experience as the wife of an unprincipled man, urges Helen to marry the appropriately dubbed Mr Boarham and live an existence of dull respectability. Anne Bronte makes an excellent job of managing to portray Helen’s physical attraction to the wicked Arthur for all the limits of Victorian text.

Helen believes that she can use her influence to reform Arthur; this scheme will, of course, only work if Arthur truly wishes to change his lifestyle himself, particularly as Helen in marrying him gives up all her legal rights.

She underestimates the hold that drink and his egotistical joy in his libertine conquests has over him, and unlike the outcome apparently foreseen by many a romantic historical novelist who blithely marries off a heroine to a Regency rake who claims that he will change now that he has met the love of his life, Helen gradually loses her respect for Arthur as he sinks into drunken debauchery, while what he sees as her joyless hectoring quickly extinguishes his passion for her.

The disgust that the critics felt for the brutality of some of the scenes of riotous drunkenness in the novel seem to me to indicate Victorian repression. They seem as appalled as much as anything by the preoccupation that the author might possibly be a woman, and if so, what sort of a woman could witness, let alone reproduce in a novel, such appalling excess?

Of course, Anne Bronte herself is appalled by drunkenness and squalid debauchery; while her (startlingly modern) ‘Universalist’ outlook was that of an enlightened Christian who had no belief in eternal damnation, through the lips of her heroine, she expresses the strongest moral disapprobation of such brutal excesses; but for the critics, the unimpeachable Christian moral of the story was nto sufficient to make up for its shocking content. 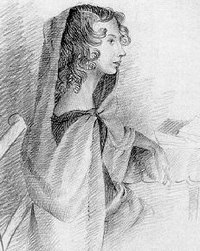 Charlotte Bronte herself did not consider ‘The Tenant of Wildfell Hall’ worthy of publication and excluded it from the posthumus editions of the novels of her sisters’ which she subsequently to bring out.

I am one of a growing number of modern readers who consider that Anne Bronte was generally underestimated author of strong and impressive texts and fully the equal of her more celebrated sisters.

I hope to write more of this in subsequent posts as I read through the novel, but for now, I would like to remark that the note of startled horror which Anne Bronte brings to the drunkenness of Arthur Huntingdon and his friends was to some extent the product of her own age.

A great many long suffering female relatives of all classes accepted that frequently male family members would drink until ‘their ideas became confused’ (to quote Elizabeth Gaskell). Beer (and rather stronger beer than is sold nowadays) was commonly taken instead of the unsafe water, and while the upper classes took port and brandy the lower classes drank gin.

Helen is in many ways a delightful heroine, spirited and compassionate, lively and opinionated; Ms McDonough quotes the remarks of an early critic, who comments that Helen, with her modern disgust at drunkenness, is slightly incongruous amongst the Regency rakes. The critic comments that it is as if Jane Austen had entered into an earlier, coarser age. I think that this critic to some extent has a point; a woman from their era would have been too familiar with male drunkenness to be shocked at encountering it. Anne Bronte probably was incorrect in dismissing the more tolerant views of the earlier age towards excess. However, that would not mean that a wife of spirit would necessarily find it acceptable as a regular habit in a spouse, and Helen is every bit a woman of spirit.

Clarissa, Richardson’s heroine of a hundred years earlier, does not have to struggle against drunkenness in Lovelace, because  drunkenness is not one of the excesses in which he indulges, but given the sharp homilies she repeatedly gives him on all his other failings, we may be sure that had it been one, that most thoroughly Georgian of heroines would have taken him to task for that too.

And on the sheltered gentility of Jane Austen’s heroines, that can be overestimated; they too, were from the Regency age. Elinor from ‘Sense and Sensibility’, though  decidedly from the respectable gentry, assumes when she meets an incoherent and emotional Willoughby that he must be drunk. She calmly advises him, ‘Your errand will more properly be conducted tomorrow’.

Next week: More reflections on ‘The Tenant of Wildfell Hall’.

One thought on “‘The Tenant of Wildfell Hall’ by Anne Bronte; An Underestimated Classic”